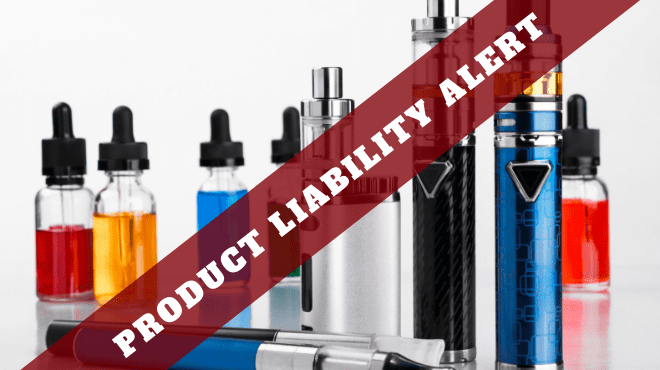 The U.S. Centers for Disease Control and Prevention (CDC) and the Food and Drug Administration (FDA) are investigating a nationwide outbreak of pulmonary disease largely affecting teens and young adults after one Illinois man’s death and nearly 200 hospitalizations from severe lung illnesses in connection with vaping or “e-cigarette” products have been reported as spreading across 22 states in less than two months.

The CDC has not yet confirmed whether vaping devices are the underlying cause for the one death and staggering 193 cases of “severe unexplained respiratory symptoms” across the U.S. since June 28th of this year. But there are reasons to suspect a link, as officials have identified a compelling pattern of e-cigarette use or vaping in every reported episode of lung illness in the investigation so far, and an official press release revealed that evidence suggests an infectious disease can be ruled out as a cause. Many patients have also reported a similar gradual onset of symptoms, including “breathing difficulty, shortness of breath, and/or chest pain,” before hospitalization. Some have experienced vomiting, diarrhea, and fatigue as well. Doctors have been asked to contribute to investigative efforts by reporting cases they believe may be related. Last week, the Food and Drug Administration (FDA) announced that the agency is investigating more than 120 reports it has received of seizures occurring after vaping or e-cigarette use.

E-cigarettes, also known as “e-cigs,” “vape pens,” “vapes,” or “mods,” are battery-operated handheld smoking devices designed to produce an aerosol that is inhaled directly into the lungs. This aerosol “vapor” (which gives “vaping” its name) is created by heating a liquid blend that usually contains nicotine–the addictive ingredient in tobacco products– as well as flavorings and other chemicals that help create the aerosol. Bystanders can also breathe in this aerosol when a user exhales into the air. Aside from nicotine, e-cigarette vapor can contain chemicals that are known to be harmful, such as heavy metals like nickel, tin, and lead, volatile organic compounds, and cancer-causing agents.

What are the Health Effects of Using E-Cigarettes?

Vaping products are uniquely dangerous in that their potential for damage is still unknown, after they quickly gained popularity well ahead of legislative regulation and research. Aside from identifying toxic substances that they may contain, scientists are still in the process of understanding what long-term health dangers may take effect after extended exposure. In an interview with TechCrunch, Dr. Brian King, Deputy Director for Research Translation in the Office on Smoking and Health (OSH)  accounted for this sudden uptick in adolescent lung disease as a possible result of widespread e-cigarette use–which is only just now being recognized: “the problems have been occurring all this time but only recently have hospitals and other organizations done the due diligence as far as linking them to e-cigarette use.” Studies have shown that it can generally be difficult for consumers to know what e-cigarette products actually contain, and without approval from the FDA, the public is left in the dark as manufacturers of e-cigarettes are not required to disclose all the ingredients contained in the devices. Research published last month from Yale found that Juul vape pens contain chemicals not listed on the package that can irritate users’ airways, and in 2018 the FDA issued a warning after products from a Chinese e-cigarette company were found to contain unapproved drugs intended for erectile dysfunction.

Proponents of vaping devices have argued that vaping may be a healthier long-term alternative to smoking cigarettes because the devices produce vapor, as opposed to smoke–a claim many health officials dispute. On that subject, the CDC acknowledges that e-cigarettes could be helpful non-pregnant adult smokers to quit smoking because they generally contain fewer chemicals than the toxic 7,000-ingredient combination that cigarettes produce. However, the agency states that e-cigarettes are not safe for kids, young adults, pregnant women, or adults who do not currently use tobacco products. Aside from being highly addictive and known to harm adolescent brain development, nicotine has poisoned children and adults who have ingested it in liquid form or absorbed it through the skin, according to the American Academy of Pediatrics. Defective vapes have also been responsible for other unintended dangers, including fires and explosions, some of which have resulted in serious injuries. Even if vaping is a safer alternative to smoking, there is still much to know about how much less of a risk it offers.

Who is Using E-Cigarettes?

Individual manufacturers and the vaping industry as a whole have been criticized for designing and marketing pens to appeal specifically to minors, who are statistically more likely than adults to use e-cigarettes. Last year, the Surgeon General of the United States, Jerome Adams, declared vaping among American teens an “epidemic” and a CDC study conducted in 2018 showed that more than 3.6 million middle and high school students had used e-cigarettes in the past 30 days. As vaping becomes more common among younger age groups, and the potential risks more apparent, it is important that parents speak with their teens and children about why vaping and tobacco products are harmful. For resources, tips, and talking points, visit teen.smokefree.gov.

Department of Public Health officials have encouraged that anyone experiencing any type of chest pain or difficulty breathing after using e-cigarettes should seek medical attention.